Writing plays is more exciting and comes more easily to me than writing novels. The reward – that is seeing one’s words performed before a live audience and hearing the applause – is amazing. When you write finis at the end of a novel the silence is deafening. Listening to the gossip and hearing the audience’s opinions of Act One in the interval of your stage play is one of the perks.

My first play Home Truths (1997) started life at the Theatre Royal, Nottingham, before going on to `number one venues’ such as the Yvonne Arnaud Theatre, Guildford, the Churchill Theatre, Bromley, the Theatre Royal, Lincoln and the Opera House, Manchester. The talented cast included Edward Hardwicke (son of Sir Cedric), Christopher Cazenove (of Dynasty fame) and the talented stalwart of the the theatre Lynda Baron.

“uproariously funny… deals with the darker side of human relationships…so many layers in this bittersweet family tale that it holds the interest from the first moment to the last.”   Newark Advertiser

“…explores the nature of truth and echoes TS Eliot’s assertion that man cannot bear too much reality…. amid the laughter there are truths nibbling away at the slender veneer that each spreads over the cracks in the crazy paving of life.”   Farnham Herald

“Friedman’s script captured some of the tortuous moments of the family Christmas… the audience, particularly the men, went home happy.”   Brighton Evening Argos

“Everyone spellbound, not a cough or a crackle throughout.”   Shirley Conran

“The play is extremely sophisticated and very clever in both it’s content and structure. The characters are finely drawn and deftly constructed. The humour is effective on an intellectual level as well as on the more basic `one-liner’ level… Highly recommended on the festival’s shortlist.”   London New Play Festival

“….lots of laughter and it’s almost as good as Ayckbourn… Rosemary Friedman has a light touch and an ear for dialogue…”   The Advertiser (Surrey)

“The unwritten rules of the stage decree that when a diverse family is reunited to spend Christmas in a country cottage, the festivities will not pass off without unpleasant incident. Rosemary Friedman’s new play Home Truths spreads guilt, recrimination and fatal honesty amid the mistletoe and paperchains…”   Dartford Times

“Rosemary Friedman’s intriguing play… starts off like a mystery thriller, feels at times like a light comedy, has a certain fairy-tale quality and packs `a message’… There is much to enjoy as this is a crisp production with first-class performances from a starry cast.”   Daily Echo (Bournemouth) 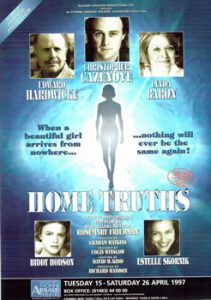 Change of Heart (2004), based on the real-life story of Professor Dame Julia Polak who received a life-saving heart-lung transplant from the hands of the renowned surgeon Professor Magdi Yacoub, raised the profile of those life-threatening illnesses which required urgent transplants. It was instrumental in raising funds and attracting organ donors as did my novel on the same subject Intensive Care. The excellent cast included Julie-Kate Olivier (daughter of Sir Laurence Olivier and Dame Joan Plowright).

“…despite the complications … many stranded work…handled expertly… inspired by Professor Julia Polak, a real life survivor of a heart/lung transplant.”   Ham & High

“….convincing insight… into the way a person’s morality is recast while they or their loved ones edge closer to death.”   Jewish Chronicle

“…this gripping play examines the complexities of human relationships… and poses moral and ethical questions not often heard on stage.”   NW Magazine

“… a moving and thought-provoking play which does not pull its punches.”   Theatreworld

“.. an adult drama which rises above the usual medical soap opera to shed light on what our bodies really mean to us.”   What’s On

“Contagious entertainment which could have theatregoers waiting on a trolley in a corridor the remainder of the winter.”   Times Chronicle Series

An Eligible Man (2008) based on my novel of the same name, premièred in London and has so far had 2 successful tours (including one in Poland) with a third in the offing. The original production starred Graham Seed (Nigel Pargeter from The Archers) and a wonderful supporting cast.

Attending rehearsals and hearing one’s words come to life in the mouths of the actors, not to mention seeing one’s name in lights and on posters (in the case of Poland all over town) is an exhilarating experience and ample reward for the lonely days slogging away at the computer.

“… plenty of humour… and moments of poignancy. An Eligible Man is very enjoyable. The audience laughed out loud and there were murmurings of approval during the interval.”   Northwest

“…constant interweaving of pathos and wit is wonderfully adroit… some pungent things to say about bereavement… of West End star standard. … a play that holds one from beginning to end.”   Francis King (former Sunday Telegraph drama critic).

“…a charming piece of work… catch it if you can.”   Newark Advertiser

“…tender and funny… It really has the whole package.”   Staffordshire Sentinel

“This was a terrific piece of theatre, a great cast… and brilliant yet subtle script/plot. A joy.”   Thelatest

“A touching and hilarious comedy of grief…”   OffWestEnd.com

“The audience had a great time thanks to Rosemary Friedman’s text and the acting.”   Poland